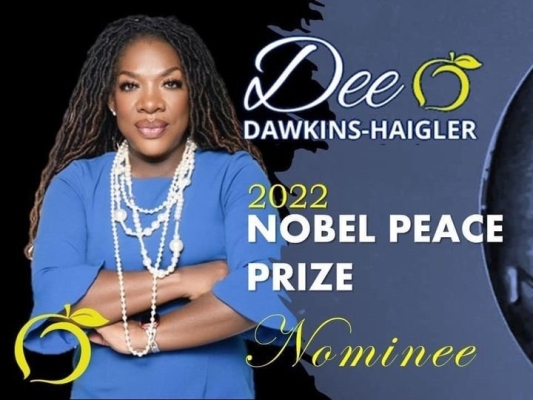 The Honorable Roysdale A. Ford, Member of Parliament in Guyana and one of her nominators for the Peace Prize, states "Dr. Dee Dawkins-Haigler has been instrumental in the fight for Afro Guyanese gaining full access to government and global resources. She has been an ally in trying to ensure that equitable sustainable economic development is achieved for all Guyanese, which would level the playing field and get many Afro Guyanese people back to work and out of poverty."

The Honorable Dee Dawkins-Haigler is a champion for women and girls empowerment and continuously works on behalf of assisting vulnerable populations throughout the global village states Representative Laura Hall, (AL) President-Elect of the National Black Caucus of State Legislators (NBCSL), who recently presented a resolution to Dawkins-Haigler in the Alabama House of Representatives. Representative Hall has accompanied her to countries such as Nigeria, Guyana and United Arab Emirates and knows firsthand the work she does to eradicate poverty by providing for orphans and empowering widows with micro-grants to help them start small businesses with proceeds from two of her literary works - A Message to Our Daughters: Turning Trials in Triumphs and Empower Her: Innovation, Entrepreneurship and Development.

Dawkins-Haigler, a Goodwill Ambassador and Global Connector, not only travels extensively throughout Africa and the Caribbean, she also facilitates visits from world leaders to visit Georgia, New York and Washington DC to further build diplomacy and trade. Dr. Ken Giami, publisher of African Leadership Magazine, the largest and most respected publication centered around global leadership in the world, states it best, the Honorable Dee Dawkins-Haigler has a unique way of making everyone feel that we are truly a global village by bridging the gap between those on the continent of Africa with those living in the diaspora. She has been an ally as it relates to diplomacy and creating strategic economic partnerships to help close wealth gaps for people of African descent.

She dedicates her life to fighting for social justice and human rights issues that promote peace and economic stability. She is hailed as a champion and catalyst for systemic change by working with various world leaders and political regimes throughout Africa and the Caribbean, throughout Africa and the Caribbean, assisting them with tangible ways of achieving the Sustainable Development Goals (SDGs) outlined and approved by the United Nations. Her work has focused on the eradication of poverty, gender equality, affordable and clean energy and quality education to just name a few.

Dee is the Founder/President of the Organization of World Leaders (OWL) a consortium of leaders in Government, Law, Business, Health, Finance & Politics dedicated to working together to build alliances for economic sustainability and growth in Africa and the diaspora. She is also the Chief Ambassador to the United Nations in consultative status with the Economic and Social Council (ECOSOC) for the Center of Economic Leadership and Development (CELD) in New York, Geneva and Vienna. She is the Founder of One Georgia which is dedicated to bringing together clergy, elected officials, social and civic groups, civil rights organizations and fraternities and sororities for the collective purpose of promoting issues salient to the African American and Hispanic communities with a special emphasis on economic justice and parity.  In addition to the above work, Dee is the Organizer of the Minority Cannibas Coalition (MCC), an organization dedicated to promoting equity and access in the cannabis industry.

Dee is an advocate in the fight against human trafficking, domestic violence and teen dating violence which led her to produce the documentary/drama “Black Girls Die Too: The Back Page Murders”, which chronicles the death of Fourteen Black Women murdered as a result of using online human/sex trafficking websites such as Back Page.  Dee is a member of Delta Sigma Theta Sorority, Inc., Top Ladies of Distinction, National Council of Negro Women, and the Order of Eastern Star. She is a past Regional Officer for Jack and Jill of America and is President of the East Metro Orchids. Dee resides in Lithonia Georgia. She is married to her college sweetheart Colonel David  Haigler Jr. and they have four children Christopher, Christyn, Hannah and Joshua, and two grandchildren Amari and Kingston.

She is an ordained elder in the African Methodist Episcopal Church, celebrating 25 years in ministry, and serves at First Saint Paul AME Church, Lithonia, Georgia,  in the 6th Episcopal District, the Rev. Dr. Marvin Crawford, pastor.

Messages of commendations and congratulations can be emailed to: dawkhaig7@aol.com 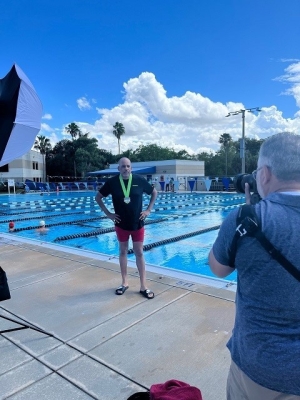 Dr. Herman O. Kelly, Jr. was named a game changer by Humana at the 2022 Senior National Games in Ft. Lauderdale, Florida he was one of 12 named and one of two swimmers named for this award. The award is given every two years at the Senior Games to persons who work toward healthy living and community Service. Dr. Kelly has competed in two Senior games, and he has an annual fundraiser for Cancer, entitled Swim For Linda.

Presently, he is seven-time state Champion in Louisiana Senior Games. This prestigious award is given to persons 50 and over who work hard toward exercise and healthful living.

Dr. Kelly is the pastor of Bethel AME Church in Baton Rouge, Louisiana.

Congratulatory comments can be emailed to: spidermh7@yahoo.com 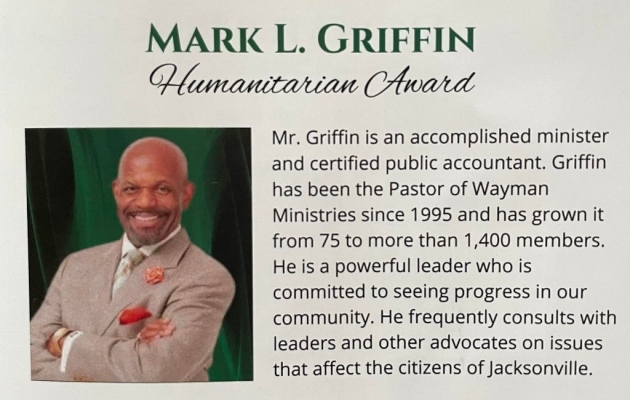 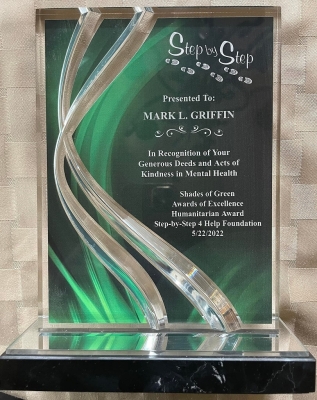 Congratulations are extended to the Reverend Dr. Mark L. Griffin on the occasion of being honored by the Step-by-Step 4 Help Foundation, Inc. with their 2022 Community Hero Humanitarian Award at their Shades of Green Inaugural Gala held on Sunday, May 22, 2022, at the Schultz Center in Jacksonville, FL. Dr. Griffin serves as the servant leader of Wayman Temple AME Church (ONE Church - TWO Locations), Jacksonville,  Florida  (East Conference - 11th Episcopal District).

Congratulatory messages may be sent to: