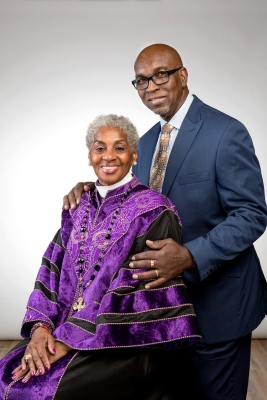 Anne Henning Byfield is one who dares to Live, Learn, Lead, and Love GOD. She lives a life filled with creativity and passion as a preacher, psalmist, a poet, spoken word artist, strategic consultant, writer, composer, wife, mother and grand- mother. Married to Ainsley for over 40 years, they have one son, Michael, and four grandchildren. She loves GOD and encourages others to know and love GOD as well.

As a leader, Bishop Anne Henning Byfield serves as the 135th elected and consecrated bishop of the African Methodist Episcopal Church. Her historic election in the year 2016 represents the first time in the history of the AME Church, a person was elected who had a sibling on the bench of Bishops. She is also the first known person to be elected from Indiana since Bishop William Paul Quinn.  Bishop Byfield is the President of the Council of Bishops of the African Methodist Episcopal Church. At the 51st Session of the General Conference of the African Methodist Episcopal Church, Bishop Byfield was assigned as the Presiding Prelate of the Thirteenth Episcopal District (Tennessee and Kentucky). Previously, she served as the Presiding Prelate of the 16th Episcopal District, where she provides leadership to seven annual conferences in the Caribbean, South America, and Europe.

She is the author of three books. The first one Let the Worship Begin is a book of lectionary aids for the church and pastor. It contains, calls to worship, litanies, stewardship prayers, and benedictions. The second: The Essence of My Existence is a book of essays and poetry, which helps with personal and professional growth. Her third book Produced by Strength, Living by Power provides life changing principles for those on the journey of life. Her other works include Flowing Essence, a Spoken Word CD, An Explanation of AME Church Worship; Now That You Are Saved: Preparing Leaders for Leadership, Odyssey, A Girls Mentoring Program, AME 101, Reigniting Success, and numerous Christian Education materials. She wrote the litany used for Mrs. Rosa Parks’ funeral in Detroit, Michigan, and Congresswoman Julia Carson’s funeral in Indianapolis. She is also the editor of the Prayer Booklet for the 2008 General Conference.

She is a former Presiding Elder of the North District Indiana Annual Conference and of the South District. She is the first presiding elder who is female in the Fourth Episcopal District and considered first woman presiding elder in the AME connection whose father was presiding elder. She has served as Senior Pastor of three churches, Bethel AME Church, Bloomington, IN, Robinson Community AME Church, Indianapolis, and St. Paul AME Church, Detroit, MI. She is the managing partner of AHB and Associates, a consulting firm to help clients unleash their talents through personal and organizational transformation, and leadership development. She is a member of Alpha Kappa Alpha Sorority and held numerous connectional and local offices.

She has received numerous awards including the Jarena Lee Preaching Award; the Legacy Award for over 25 years of leadership in Pastoral Health Initiatives particularly in the HIV/AIDS community; one of eight religious history makers in the Indianapolis Community, one of the most 15 influential African Americans in Indianapolis and was named as one of its ten most influential pastors. In 2016 she received the state of Indiana 47th Drum Major for Justice Award.

Ainsley M. Byfield was born in Kingston, Jamaica, the sixth child to Lambert and Loretta Byfield. He attended St. George’s College, and St. Michael’s Seminary. After moving to Indianapolis, Indiana he graduated from Marian College, Indianapolis, IN.

Ainsley is employed as a Special Process Inspector for Rolls Royce Corporation, Indianapolis, IN. He has previously worked for General Motors Corporation. He is an avid tennis player, reader and likes to play domino, cards and works around the house. He has served as President of Capital City Tennis Club, President of the Indiana Conference M-SWAWO+PK’s and worked in Men’s and Boys’ ministry in various local congregations. He has a quiet spirit of generosity and is known to help persons in crisis without any personal recognition.

Ainsley M. Byfield has been married to E. Anne Henning Byfield for over 40 years (married on  Christmas Eve). They have one son Michael, and four grandchildren, Miles, Liana, Kendra and Jeremiah. He looks forward to working with his wife, Bishop Henning Byfield and the Thirteenth Episcopal District.